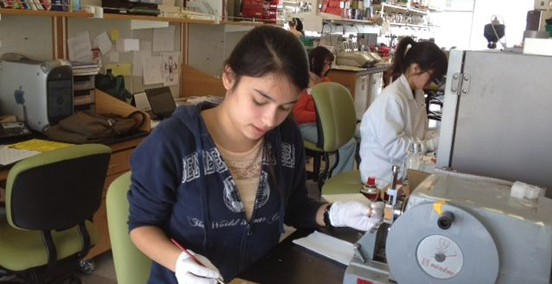 For many Southern California high school students, summer is synonymous with surf, sand and sun. But, for some of Los Angeles’ top math and science students, the lure of the beach and traditional summer fun fizzles fast when compared to microscopes, slide kits and real-life stem cell research.

Armed with little more than protective gear and enthusiasm, 20 overachieving teenagers have been clocking 40-hour weeks in the lab at USC’s Eli and Edythe Broad Center for Regenerative Medicine and Stem Cell Research.

Among them is 17-year-old Brian Tom of Lincoln Heights.

“It’s fascinating because stem cells have all this potential to heal these degenerative diseases like Multiple Sclerosis and Alzheimer’s,” says Tom, a senior at Bravo Medical Magnet in Los Angeles. “It’s amazing how you can create multiple tissues from one cell.”

Stem cells offer promise as a treatment or cure for many diseases because they can be can induced to morph into other cell types — such as brain, muscle or skin cells. Stem cells can also divide without limit, which gives them the potential to repair and replace damaged tissue.

“You can just imagine the possibilities,” says Sophie McAllister, a 17-year-old senior at Harvard-Westlake School in Los Angeles. McAllister works with a USC mentor on cardiac cell regeneration.

McAllister and nine other students are in a program that’s privately funded by two donors with ties to USC. Meanwhile, Tom and his summer school classmates are studying under a statewide program funded by the California Institute of Regenerative Medicine (CIRM), a voter-created agency that funds stem cell research throughout California.

The two programs share the goal of nurturing stem cell interest among California’s top math and science students from all across the socioeconomic scale.

“We’re all very excited for the potential for stem cell and regenerative medicine and what it can do for human health,” says Kathryn Rich, director of training and education programs at USC’s Broad Center. “Training the next generation is the key part of that.”

Each Friday, she says, the students from both programs attend forums or lectures, which typically focus on data analysis, scientific writing and the ethical issues involved in harvesting stem cells from discarded embryos to create new cell lines.

But, most of the time, they’re upstairs working in the 5th-floor lab with mentors who are doing actual stem cell research.

On a recent afternoon, McAllister demonstrated how she makes microscope slides containing minuscule heart cells for the researchers in her program.

“I dehydrated the heart,” she says, “Then we set it in a cube of wax and into that machine.”

McAllister points to a sturdy white block of a device she says is called a microtome. That, she adds, is the machine “that slices it really thin so you can put it on slides.”

Next to the machine sits a large computer monitor that displays the mouse cells, each stained in bright colors.

“This is actually the whole mouse that was sectioned, but this part’s the heart,” she says, pointing to a bright blobby mass indecipherable to the uninitiated eye.

“One of the problems in stem cell research is that even though we can create a lot of types of tissues — brain cells, cardiac cells, muscle cells — they don’t behave in the exact same way that we expect them to,” Tom says. “Sometimes they die spontaneously and we don’t know why. Sometimes they migrate to weird positions and become cancerous.”

Solving these mysteries is a thrilling prospect to the students in USC’s stem cell program, even if that sometimes means sacrificing friend-time.

“They’ve sort of put aside some of their other interests, [the desire] that other kids might have for a social life,” Rich says, “because they love science and it becomes a lifestyle, almost.“

A lifestyle that Sophie McAllister and Brian Tom say is well worth the time they’re investing.

“This is one of the great spots for looking into regenerative medicine and stem cells in general,” McAllister says. “I couldn’t have asked for anything more to do with my summer.”

The students complete their summer session with a colloquium open to the public on Aug. 10 from 11 a.m. to 3 p.m. in the first floor seminar room at USC’s Broad Center.


You need to login to view this page.
New? Register an account here.

We do not share your personal details with anyone.